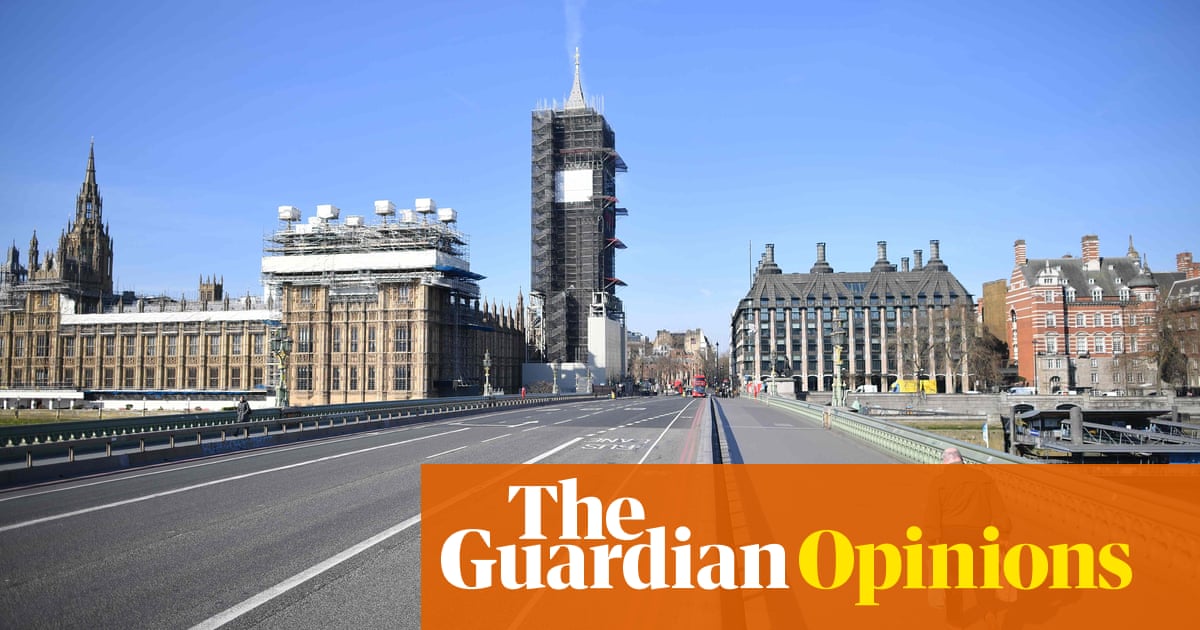 Coronavirus has been devastating for those who fell sick or lost loved ones. The restrictions imposed on everyday life to check its spread have been particularly difficult for people living in cramped accommodation, those juggling childcare and work, and those who have lost their jobs. But despite these huge losses, the pandemic has allowed us to glimpse what a different economy and pace of life might look like – one that is slower, more sustainable and less fixated on growth and consumption. A YouGov poll at the end of June found 31% of people now want to see “big” changes in the economy, three quarters want the choice to work more at home, and only 6% favour a return to a pre-Covid economy.

At the height of the coronavirus crisis in June, some 7.5 million people were temporarily unemployed – the largest quarterly decrease (18.4%) in total weekly hours since records began in 1971. Through the furlough scheme, the state made the unprecedented decision to pay the wages to those out of work. Those who were lucky worked from home and took mortgage holidays. Of course, this didn’t apply equally: many frontline workers had no other option but to go into their workplaces and put their lives at risk.

But the reduction in working time and drop in commuting across the board gave us an insight into what a less work-driven society could offer, one where important jobs that have long been undervalued and underpaid, such as nurses, carers and supermarket staff, are rightly seen as far more useful and important than well-paid “high-status” jobs. As the economy slowed, we had new reasons to question the old normal, with its frenetic productivity and mindless pursuit of economic growth.

For years, the consumer lifestyles on which economic growth depends have gone largely unquestioned. Outside the Green party, the left has been reticent to get drawn into debates about lifestyle choices – no matter how unsustainable these may be. Although most of us recognise that petrol-guzzling vehicles and fast fashion are environmentally damaging, we rarely question the negative aspects of consumerism for consumers themselves, including stress, depression and pollution.

Covid-19 may have caused us to re-examine this status quo. According to the ONS, household spending decreased by a fifth during lockdown. For decades, economic liberalism has affirmed the idea of the self-interested consumer as an almost natural human state. But during the pandemic, a more public-oriented spirit seemed to emerge. People signed up to volunteer for the NHS in droves and mutual aid groups flourished. As commuting dropped off, people had more time to spend at home and in their communities.

Lockdown momentarily benefited our physical environments, too. Cities became less air-polluted and congested, and seasoned walkers and cyclists enjoyed the utopian experience of moving unmolested on roads usually dense with cars, while others took up cycling for the first time. For a brief period, wildlife reclaimed some of its former territory and roadkill fell dramatically. Many reported hearing more birdsong. Those living under flightpaths savoured the experience of plane-free silent skies. As people flocked to parks, it became clearer than ever why we need to defend our green public spaces.

To be clear, the pandemic isn’t a model for how to green the economy. These changes weren’t based on a long-term strategy to decarbonise, but a drastic shutdown of economic activity that had painful and tragic effects. Already, politicians are urging a return to business as usual and the “bustle” that Boris Johnson lamented losing has quickly resumed. It seems unlikely that the government’s limited, albeit encouraging, promises about safe cycling and greener transport will be fully honoured. And in the longer term, we could see politicians and businesses putting economic recovery ahead of the climate crisis, reneging on existing commitments and driving carbon emissions up with stimulus packages.

Avoiding a return to the old normal will require an alternative politics of prosperity: one that presses for greater equality, gives priority to wellbeing over economic growth and is willing to challenge the consumerist vision of the good life. It may be too late to start moving towards these goals – and the journey will certainly be difficult. But coronavirus has shown us that huge societal changes that were previously thought impossible can be implemented relatively easily. Some of the experiments trialled during the pandemic could become permanent, such as more home-based working.

This alternative idea of prosperity would also mean working in different ways and to different rhythms. Perhaps we’d have more skills swapping and time-banking, a shorter working week, or revive older methods of doing things, renewing earlier, environmentally friendly agricultural practices even as we take advantage of the newest green technologies in areas such as energy and medicine. Of course, greening the economy would extend far beyond personal habits. Among other things, new forms of ownership and control over the ways we make what we need, including democratic control over renewable energy and national control of utilities and public services, would be central to this vision.

As the historian, socialist and peace campaigner EP Thompson said in his book Customs in Common, “the readiness of the human species to define its needs and satisfactions in material market terms – and to throw all the globe’s resources on to the market – may threaten the species itself (both north and south) with ecological catastrophe”. The pandemic gave us a brief insight into a slower pace of life, and to satisfactions that weren’t defined in market terms. But it will take a great deal more imagination and political commitment to build a greener economy for the long term.