The Guardian view on Covid-19 and cults of strength: the weakest response | Editorial 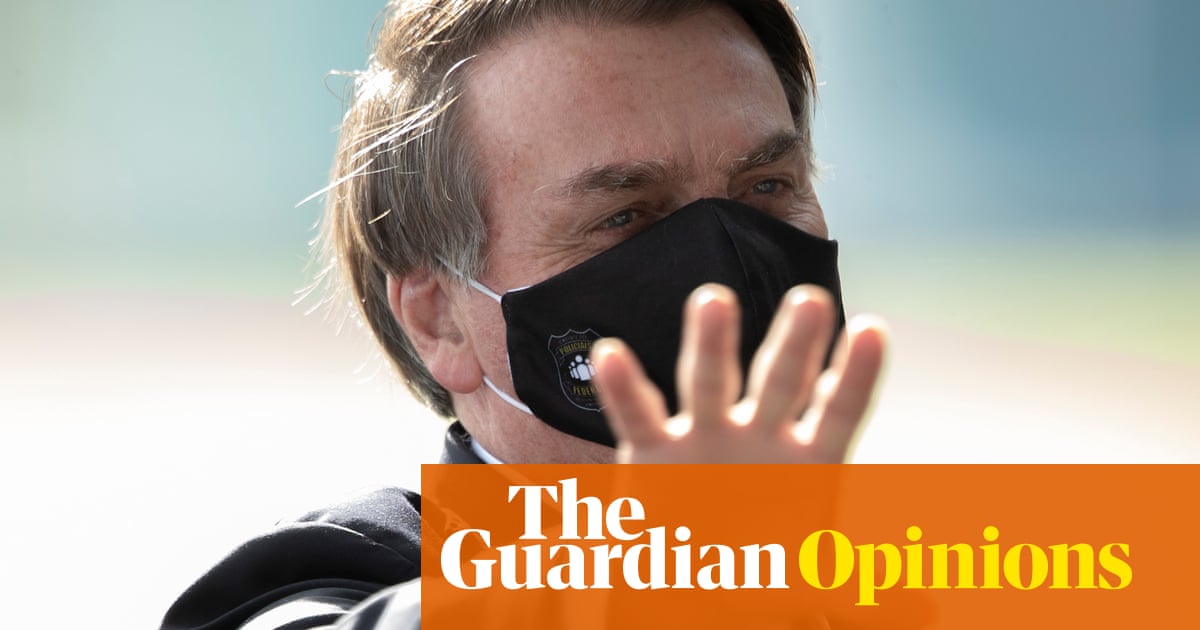 Even leaders who thrive by bullying people have realised that they can’t bully a pandemic. But nor does caution fit easily with their macho political image. Their temptation has been to let it run its course instead. Now the facts are catching up with them.

The Brazilian president, Jair Bolsonaro, has repeatedly dismissed the risks from coronavirus, defied his own government’s advice by meeting crowds of supporters, and pushed states to reopen beauty parlours as the death toll climbed. This week it passed 25,000, and a study suggested it could hit 125,000 by early August. Brazil ranks second in the world for recorded cases – all the more shocking given its strong performance in the previous HIV and Zika virus health crises.

Mr Bolsonaro’s friend Donald Trump has now imposed a travel ban on non-US citizens coming from Brazil. Yet the US is leading the world for coronavirus cases and fatalities, with 100,000 deaths, and the toll is rising as the lockdown eases. Mr Trump brushed aside warnings of the approaching crisis, failed to prepare his country and has pushed for reopening in his desperation to see some improvement in economic conditions ahead of November’s elections. Third in the tally of confirmed cases is Russia, where Vladimir Putin announced an end to the lockdown he imposed at the end of March even as infections hit a record high. More than 375,000 have now tested positive, though the death toll remains strikingly – many say suspiciously – low. Though officials claim the rate of infections has begun to slow, the polls suggest that the Russian president, like Mr Trump and Mr Bolsonaro, is now paying a political price.

India is further behind, with around 150,000 cases, but catching up fast. The disastrous failure of Narendra Modi, the prime minister, to address the needs of millions of migrant workers when imposing lockdown created a humanitarian crisis and helped to facilitate the disease’s spread through the country. Now he is easing restrictions without introducing other effective measures such as test and trace, effectively telling Indians that they must just accept the risk.

Last week, the World Health Organization noted that these four countries accounted for two-thirds of all new cases. Instead of prioritising saving lives while finding ways to ameliorate the suffering caused by lockdowns, leaders have made the same cynical gamble: taking the shortest route to reopening their economies, blaming anyone more cautious for the lost jobs and hungry households – and anyone convenient for the death toll resulting from their own inaction.

Abandoned by their national leaders, many states, cities, businesses and institutions have taken matters into their own hands to reduce the spread of the disease. So have individuals and communities. In Brazil’s favelas, community organisers and volunteers are organising public information campaigns and hiring private medical teams.

These welcome efforts may reduce the damage, but they cannot avert it entirely – as the rising death tolls show. These men have sold a cult of strength that mocks and dismisses the weak, yet are too feeble to shoulder the burden of responsibility. They use their power to protect not their countries but themselves. Will they ultimately pay, as their people have?