A Muslim teenager in Pakistan killed a religious minority man and wounded three others after the victims had allegedly insulted Islam, numerous sources reported.

Mohammad Mohab, 16, was arrested in eastern Punjab province on Friday after he allegedly opened fire on a group of Ahmadi men who Mohab said were insulting Islam, the Associated Press reported.

Tahir Ahmad, 31, a homeopathic doctor, was killed in the shooting which happened as a group of Ahmadis were gathered for worship at a home. Three other men, including Ahmad’s father, were wounded in the shooting.

The Ahmadi faith is a minority religion that Sunni militants have targeted in the past because they believe Ahmadis are heretics. 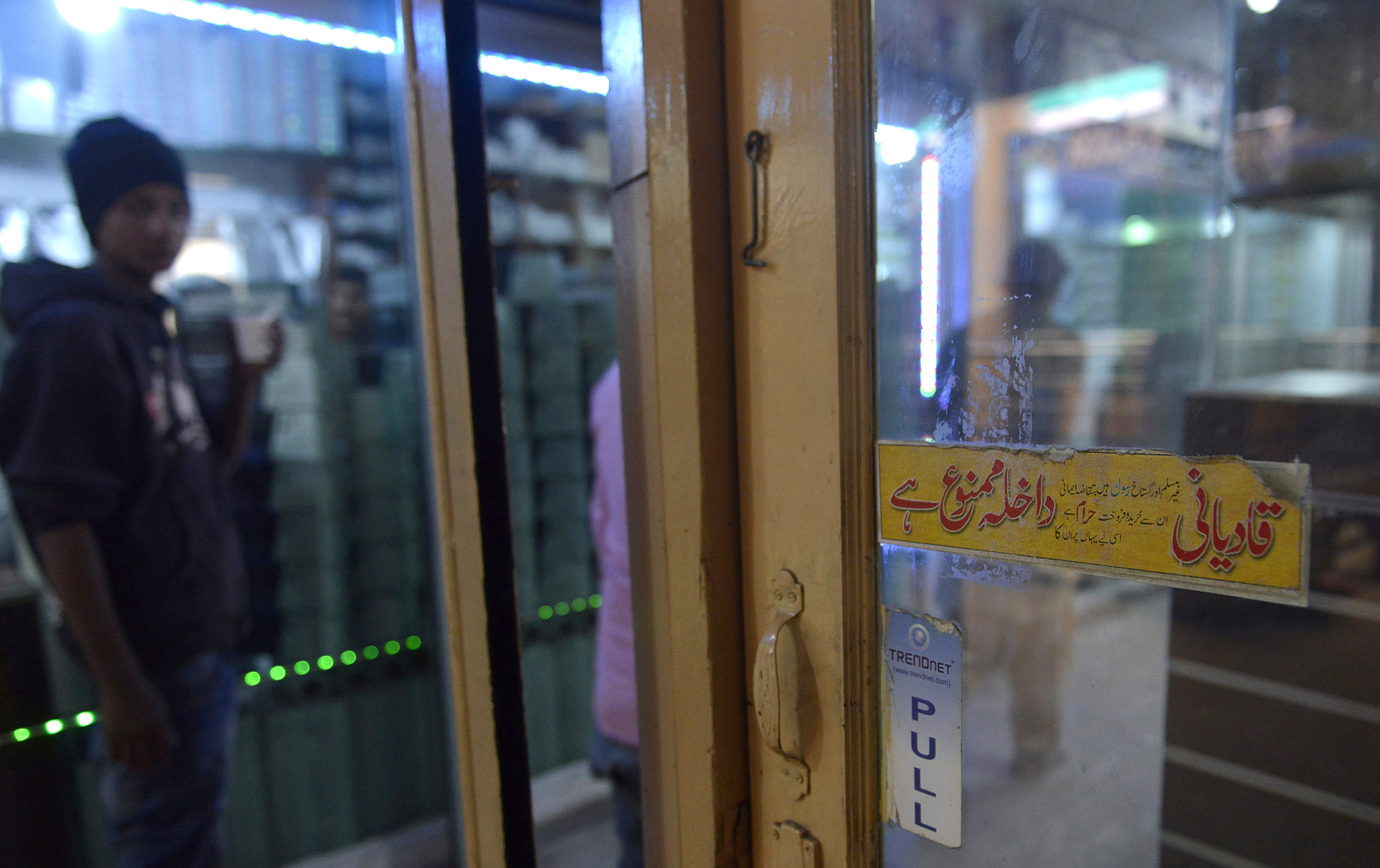 A Pakistani man looks at a poster (R) displayed outside a shop “banning Ahmadi customers from entering” at a market in Lahore on December 14, 2015.(ARIF ALI/AFP via Getty Images)

Ahmadis originated in British-controlled India in the 19th century and see themselves as an Islamic movement, but are regarded as heretical by orthodox Muslims and forbidden from calling themselves Muslims or using Islamic symbols in their religious practices, according to Reuters. Pakistan is mainly a Sunni Muslim country of more than 200 million people.

Ahmadi homes and places of worship have been attacked by Islamic extremists and are among the minority faiths in Pakistan to face religious discrimination.

A spokesman for the Ahmadi community, Saleem Uddin, said that the victims were targeted for their faith, according to the AP.

Human rights advocates have decried Pakistan’s blasphemy laws, which they say are used to intimidate religious minorities and to settle personal scores.

In this photograph taken on March 27, 2017, Ahmadi sect residents visit a cemetery at Rabwah in Chiniot District in Punjab Pakistan.
Economically marginalised, attacked by militant groups and frequently hit by charges of blasphemy, the country’s religious minorities are placing their hopes in Pakistan’s first census in nearly two decades to get a true sense of their numbers, as a first step toward greater political representation and rights.
(ARIF ALI/AFP via Getty Images)

In October, a Muslim Pakistani professor allegedly shot and killed an Ahmadi professor a day after the two disputed over religion. Police say the victim was involved in a verbal brawl over religious issues, and that he had received threats and demanded protection for people belonging to the Ahmadi community.

A month prior, a Christian man was sentenced to death in Pakistan for insulting the Prophet Muhammad. (RELATED: Muslim Pakistani Professor Kills Minority Professor After Argument Over Religion, Police Say)

Week’s prior to the Christian man’s sentence, Tahir Naessem, a Pakistani-American, was shot dead in a courtroom while being tried for blasphemy in the city of Peshawar. The teenager who shot the man said he killed him for insulting Muhammad, according to Reuters, and he was subsequently arrested and glorified as a “holy warrior” by supporters in Pakistan and Islamists who demanded his release.