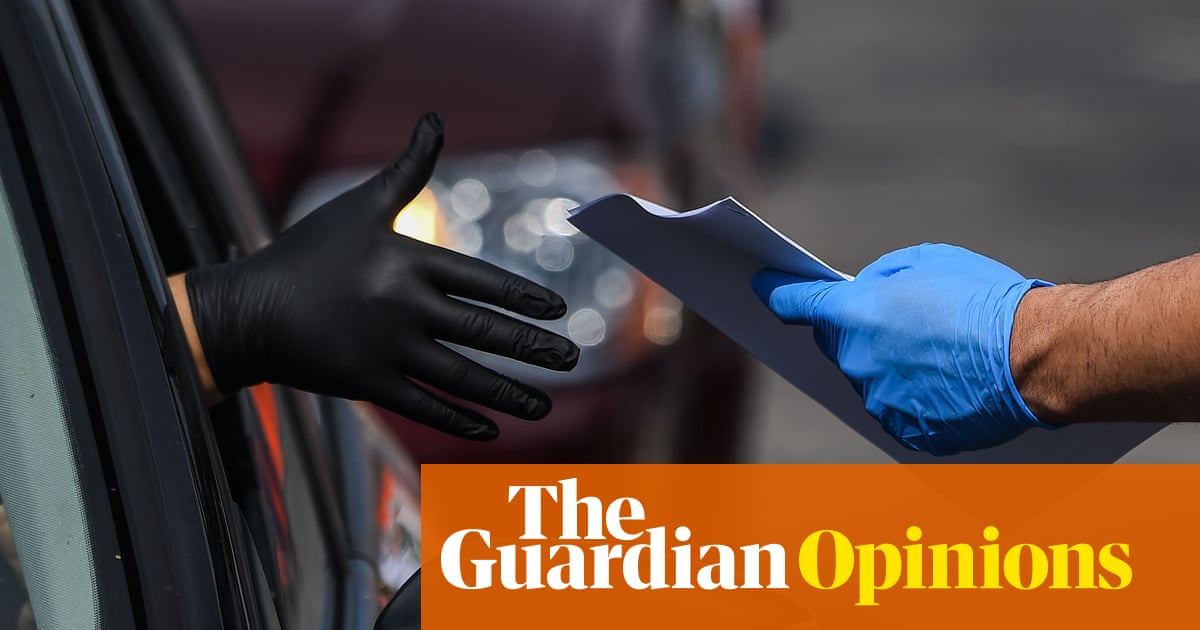 The chasm between the two Americas – “Unemployment America” and “Stock Market America” – made starkly visible this spring, has not disappeared. Instead, the divide has widened.

America’s stock indexes have weathered the pandemic; the country’s job markets less so. On Thursday, the labor department reported nearly 900,000 new unemployment claims and Columbia University announced that 8m Americans had fallen into poverty since May.

Meanwhile, the number of Covid-19 cases continues to climb, the Affordable Care Act stands in legal jeopardy, and Amy Coney Barrett, the president’s latest pick for the supreme court, will not tell us if she believes that Medicare and Social Security pass constitutional muster. The New Deal may yet be undone.

On that score, language that soothed the White House and Republicans may come back to haunt them at the ballot box. According to polls, older voters are prepared to vote for Joe Biden, a Democrat, in a marked departure from elections past.

Donald Trump, not to mention many Republicans in Congress, do not seem to understand that for millions of older Americans, social security and Medicare are not nice-to-haves or cushy benefits handed out at the benevolent whims of the state. Rather, they are the earned benefits of a lifetime of work. According to US government data, Social Security benefits constitute about one-third of the income of the elderly, and for many even more.

According to the New York Times, in February, at the same time that the Trump administration was declaring that the virus was not a big deal, the president’s top advisors tipped off the gods of the markets and the Republican donor base that the outbreak would be worse than the administration was saying publicly. Trump and his minions acted as if they believed the public could not handle the truth even as Wall Street dumped its holdings.

Against that backdrop, preserving healthcare and retirement is the least they can do. But we know they won’t. Both the president and Mitch McConnell, the senate majority leader, have spoken openly of cutting or “adjusting” entitlements. Then again, McConnell laughs about the failure of Congress to deliver Covid relief.

On the campaign trail, the populist rhetoric of Trump’s 2016 campaign has given way, in 2020, to self-pity and personal resentments. The president wants us to feel his pain even as it appears that he is incapable of feeling ours. His relationship with his core supporters grows ever more asymmetric.

When Trump’s refusal to wear a mask in public is taken as a sign of defiant courage, the body politic is certainly ailing. Half of Americans view their personal situations as better than they were four years ago. At the same time, however, nearly three in five voters see the country as being in worse shape than at the outset of the Trump presidency.

When Trump’s refusal to wear a mask in public is taken as a sign of courage, the body politic is ailing

With nearly 220,000 people dead from the disease, the state of the Union is definitely hurting. The much touted “V”-shaped recovery is slow in coming, if it ever arrives.

Don’t look to election day to bind the nation’s wounds. The realities that led to Trump’s electoral college upset are still with us.

The gaps between the rural US, white evangelicals, white voters without college degrees and the rest of the country have not disappeared. Military suicides are up by a fifth and death by opioids has returned. Beyond that, the issue of immigration retains its potency.

True, the president may have given his base a sense of calm but the causes of grievance have not gone away. What David Brooks once described as an idyllic urban existence, Bobos in Paradise, appears to have turned into a hell for everyone else. Expect Trumpism to live on, regardless of what happens on 3 November and the days that follow.

A definitive Biden victory stands to provide the US with a president whose political legitimacy is less open to question or attack. Unlike George W Bush in 2004 or the incumbent, a Biden win would likely be accompanied by a majority of the popular vote.

Beyond that, Biden does not carry Clinton-era baggage. The former vice president is not a child of 1960. Likewise, no one has ever seriously accused the reflexively centrist “man from Scranton” of being a radical. Together, that would help lower the temperature for a bit, anyway, and that counts.

The two Americas will not disappear any time soon. At most, we can at least hope for some civility, and God knows we can use it.