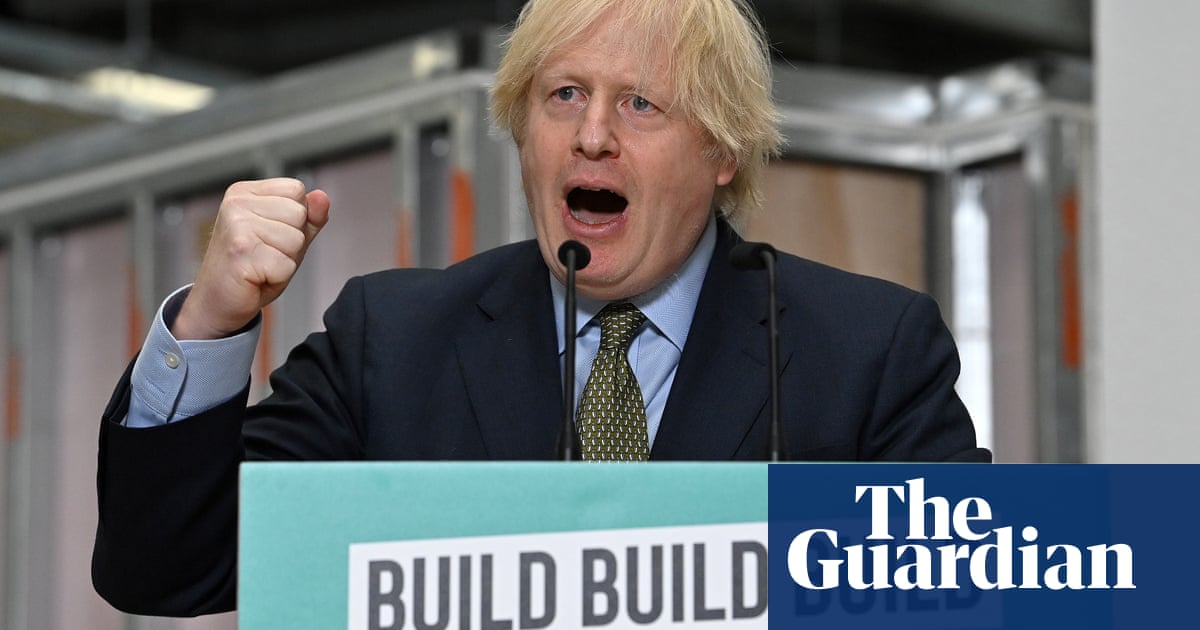 Boris Johnson delivered his vision for the country’s post-lockdown economic recovery in Dudley, West Midlands, on Tuesday, standing at a podium emblazoned with the words “Build, build, build”. As well as setting out his “levelling up” agenda and plans for a “new deal”, he talked about zero-emission jets, “psychic energies” and told journalists he was not a communist.

Preparing for the worst

The prime minister used his speech to spell out the economic “generational challenge” ahead and why he believed this required a massive programme for investment. He said the country was in the period between “the flash of lightning and the thunderclap”, “with our hearts in our mouths”, awaiting the full economic fallout from coronavirus. By setting out plans for building and infrastructure projects, dubbed “Build back better”, he said financial recovery was possible even though coronavirus was still “circling like a shark”.

The things they got right

Boris Johnson was keen to justify the government’s much criticised coronavirus response. He admitted there were lessons to learn, but insisted that there had been achievements, citing the 10-day installation of the Nightingale hospitals, the furlough scheme, the British companies manufacturing ventilators and the University of Oxford’s trials for dexamethasone.

Johnson said he was doubling down on his well-used 2019 general election commitment to make regions of the UK more equal. As a former mayor of London, he said he did not want to impede the capital’s success, but to fix the “indefensible gap in opportunity”. His “build, build, build” message included schools, hospitals, homes, rail and road, with priority projects falling under the banner of Project Speed.

He dodged direct questions on whether taxes would go up to pay for the huge levels of investment, suggesting the chancellor, Rishi Sunak, would set out measures in due course. After being challenged to say whether he was more Margaret Thatcher or Gordon Brown when it came to taxation, he eventually said his natural instinct was to see taxes reduced, but as the country faced significant challenges, he would try to ensure the burden on the public remained “reasonable”. On borrowing, he said the government was planning to “invest now, when the cost of borrowing allows it”.

Johnson claimed to have the “magic potion for dark times” ahead. In characteristically colourful language, he said the country must distil the very best of the “psychic energy” of the last few months. “Let’s take the zap and elan of the armed services who helped to build the Nightingales, the public spirit and the good humour of the entire population, and let’s brew them together with the superhuman energy of Captain Tom. Let’s take that combination, that spirit, bottle it, swig it.”

The prime minister promised to take a scythe to the red tape of the planning system, mocking the “newt counting” that could lead to lengthy holdups and prevent projects from being built. His proposals would be the most radical since the second world war, he suggested, lamenting that UK procurement took 50% longer than Germany’s and that the UK built 2.25 homes for each 1000 people in 2018 compared with France’s 6.8.

Asked whether he was prepared to stand up to middle England and Nimbys over building projects, he said: “I believe this country has got the space on brownfield sites and land that could be developed if it had the right infrastructure.”

‘I am not a communist’

Perhaps fearing he may have worried his free-marketeer support base with talk of a Roosevelt-style new deal, Johnson bizarrely explained that he was not a communist. He suggested capitalists and wealth creators should receive an NHS-style clap for their work for the economy.

“My friends, I am not a communist … Yes, of course we clap for our NHS, but under this government we also applaud those who make our NHS possible, our innovators, our wealth creators, our capitalists and financiers.”

The prime minister said he believed Scotland had been advantaged by its membership of the union in the coronavirus pandemic, because workers had been able to use the furlough scheme. “I believe the union has more than showed its worth,” he said. He added that there would be a new study of all future road, rail, air and cross-sea links between the four nations, seen as a nod to his Scotland-Northern Irish bridge idea. He also promised to complete turning the A1 into a dual carriageway.

The prime minister said the UK would try to build the first zero-carbon plane. “We should set ourselves the goal now of producing the world’s first zero-emission long-haul passenger plane. Jet Zero, let’s do it,” he said. Keeping tech innovators in the UK rather than losing them to the US was key for British jobs, he said.