When Rebecca Mark took a job in January as director of the Institute for Women’s Leadership at Rutgers University, she and her partner, Brenda Currin, who are both in their 60s, knew they wanted to live in the college’s home of New Brunswick, N.J., rather than the suburbs.

“We were looking for a place that was biking distance to campus and walking distance to the train station,” Ms. Mark said. She and Ms. Currin, an actress, decided to rent a two-bedroom apartment in Premiere Residences, a new 23-story rental building that also houses the New Brunswick Performing Arts Center. 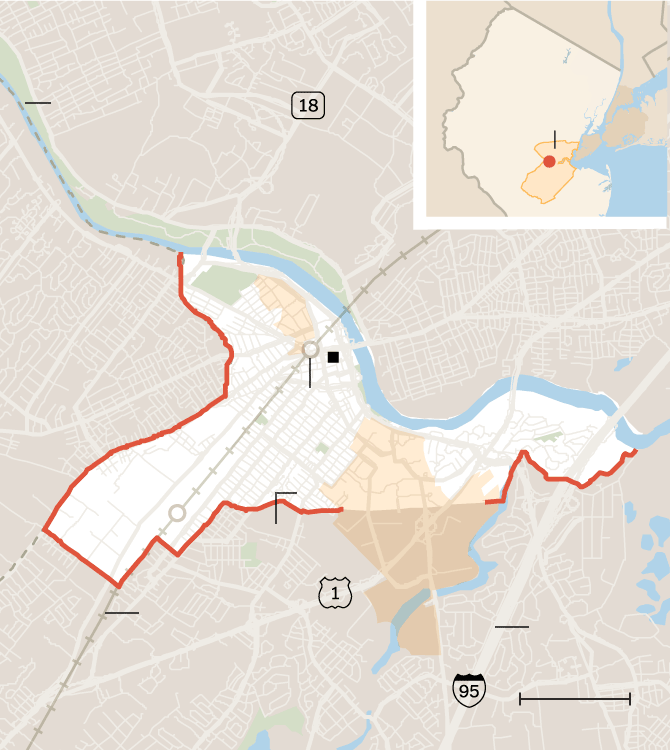 While they had hoped to attend lots of performances, the pandemic has shut down theaters for now. Still, they enjoy other pleasures of urban life, including the downtown restaurants. “We really like the diversity of the city and the fact that there are people from all over the world,” Ms. Mark said.

With a population of about 56,000 in 5.2 square miles, this Middlesex County city on the banks of the Raritan River is best known as the home of Rutgers, the state university of New Jersey, founded more than 250 years ago. The school’s footprint is everywhere, from the College Avenue campus to the Cook and Douglass campuses across town, and in buildings scattered around New Brunswick. (Rutgers has two more campuses, Livingston and Busch, in nearby Piscataway, as well as outposts in Newark and Camden.)

Two other important institutions are in the heart of New Brunswick: the headquarters of Johnson & Johnson, and the Robert Wood Johnson Medical Center.

The company, known as Devco, has worked in public-private partnerships involving Rutgers, developers, nonprofits and governmental bodies to oversee almost $1.8 billion in investment since the 1990s. Its most recent projects include the performing arts center; Gateway Transit Village, a high-rise residential and retail building next to the train station; and a large College Avenue redevelopment for Rutgers that includes academic and residential buildings.

“New Brunswick is a marvelous example of urban renewal,” said Penelope Lattimer, 73, who has lived in two homes that were part of the downtown redevelopment. Ms. Lattimer, the retired assistant superintendent of New Brunswick’s public schools, moved to Hiram Square when it was a new townhouse community in the 1990s.

Recently, when she decided she wanted one-story living, she moved to Premiere Residences, which currently offers studios for as little as $1,860 a month, up to two-bedrooms for over $3,000.

“I wanted to stay in the hub of the downtown area,” Ms. Lattimer said.

The city’s population is similarly diverse, according to data from the U.S. Census Bureau, with 50 percent of residents identifying as Hispanic or Latino, 25 percent as white, 15 percent as Black or African-American, and 10 percent as Asian.

The Dewey Heights and Rutgers Village neighborhoods, near the New Jersey Turnpike, have a suburban feel, with single-family homes built in the postwar period, said Andrew Zastko, of Gloria Zastko Realtors, in North Brunswick.

Anna Marie Henno, 60, and her fiancé, John Reinke, 73, recently paid $408,000 for a ranch house in Dewey Heights. “I love the access to all the major highways,” said Ms. Henno, who previously lived in a condo in New Brunswick, but after being cooped up during the pandemic, wanted a house and backyard for her young grandson, who lives with her.

“It’s a beautiful neighborhood, and you’re four minutes away from downtown,” she said of Dewey Heights.

Many of the city’s residents rent their homes. Rents can range from about $800 for an unrenovated one-bedroom in an older building to as much as $3,370 for a two-bedroom at Premiere Residences, the new apartments above the performing arts center.

In late September, there were 72 single-family houses, condos and townhouses listed for sale on Zillow, from a two-bedroom attached house for $159,000 to a six-bedroom house for $850,000.

According to New Jersey Realtors, 71 single-family houses, condos and townhouses sold in the first eight months of the year, compared with 114 during the same period in 2019. The drop in sales this year reflects a near-standstill in real estate activity last spring, during the first few months of the pandemic lockdown, said John Calandruccio, a Re/Max broker in New Brunswick.

Students flock to bars and ethnic restaurants on Easton Avenue, near the Rutgers University College Avenue campus, but the scene is quieter this fall because the pandemic has forced most students to study remotely. You can still get a “fat sandwich” at RU Hungry?, a deli on Hamilton Avenue that carries on the legacy of the city’s now-departed grease trucks, with a cuisine based on a deep-fried trifecta of French fries, mozzarella sticks and chicken fingers.

New Brunswick takes pride in its cultural offerings, including the Rutgers University Mason Gross School of the Arts, the George Street Playhouse, the Crossroads Theatre Company and the American Repertory Ballet, which are now housed at the performing arts center. Next door is the historic State Theatre.

The city’s restaurant scene is also lively, with popular spots like the Frog and the Peach, Steakhouse 85, Veganized and Catherine Lombardi.

New Brunswick’s crime rate has dropped by more than half over the past two decades, according to data from the New Jersey State Police. Still, a recent late-night shooting left two people dead and six injured.

The New Brunswick public school system serves 10,200 students in nine elementary schools, one middle school and New Brunswick High School. About 77 percent of students are considered economically disadvantaged, according to the New Jersey Department of Education.

New Brunswick is about 40 miles southwest of Times Square. The city has two train stations served by New Jersey Transit and Amtrak: one in the heart of downtown and one on Jersey Avenue, in the southern part of the city. A train ride on New Jersey Transit takes about an hour to Penn Station in Manhattan, and costs $14 one way or $393 for a monthly pass.

The city is also served by Suburban Transit bus lines to New York City. The trip takes about an hour; the fare is $12.20 one way or $400 for a monthly pass.

The New Jersey Turnpike cuts through an eastern corner of the city, near the border with East Brunswick. Driving to New York City takes about 50 minutes, but the trip can take much longer at rush hour.

In 1776, during the Revolutionary War, George Washington and his soldiers stopped in New Brunswick as they retreated from the British across New Jersey. Alexander Hamilton led an artillery battery that delayed the enemy’s crossing of the Raritan River, giving Washington’s troops time to escape.

Paul Robeson, the singer, actor and activist, was Rutgers University’s third African-American student and its first African-American football player. He graduated as valedictorian in 1919. To celebrate the centennial of that milestone last year, the university dedicated Paul Robeson Plaza on the College Avenue campus, and the city changed the name of Commercial Avenue to Paul Robeson Boulevard.