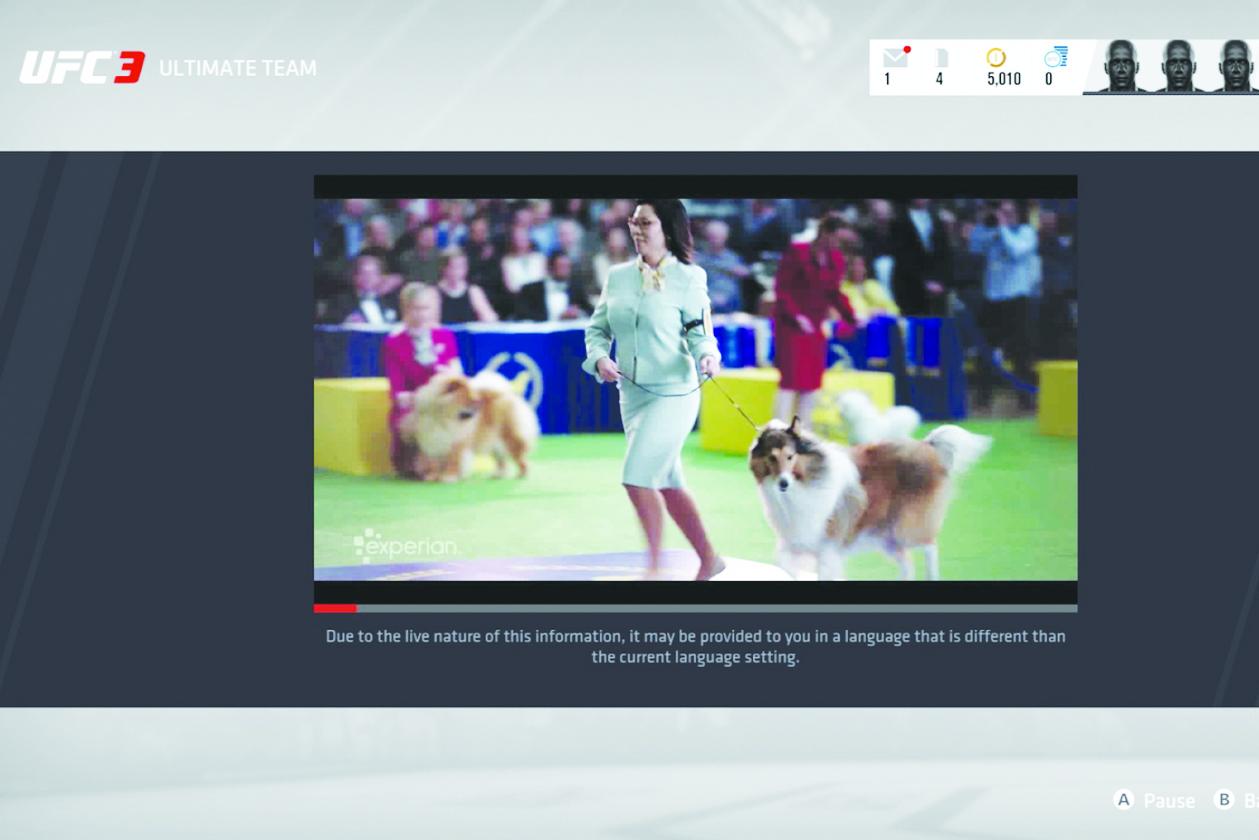 Marketers are putting TV ads in videogames played on consoles, an experiment in trying to reach younger audiences who are watching ever less traditional TV.

In May, for instance, the Turner unit of AT&T’s WarnerMedia ran three ad tests within “UFC 3,” a fighting game from Electronic Arts Inc.

But especially with the loss of live sports for much of the coronavirus pandemic, it has become harder to reach a large swath of younger viewers on the biggest screen in the house, he said.

“The way people are consuming media these days, you don’t reach 100% of your audience on TV anymore,” Mr. Hartmann said.

In exchange for watching the 15- or 30-second commercials–which is optional. Players don’t have to watch them–gamers receive points or other rewards they can use for in-game benefits.

EA Sports, which publishes “UFC 3,” is on board with the tests. An Electronic Arts spokeswoman declined to comment.

Simulmedia is in talks with other console game makers about running similar tests, Mr. Morgan said, adding that game owners will get most of the ad revenue.

Rewards-based video ads are common in mobile and social-media games, but have been largely absent from console games played on TV screens–the canvas that marketers typically envision as they and their ad agencies create 30-second spots.

Activision Blizzard Inc., for instance, runs full-screen video ads within its “Candy Crush Saga,” “Farm Heroes Saga” and “Call of Duty: Mobile” games, but it doesn’t do that in its console games, a spokeswoman said.

When ads have appeared in console games, they have more often shown up on virtual billboards or other signs within the games’ worlds. The National Basketball Association’s console games, for example, feature signs and other branding from league sponsors in their virtual arenas, said Eric Fischer, founder of consulting firm HJA Strategic Marketing and a former NBA executive.

But advertising is beginning to creep into consoles in other ways, aided by the industry’s shift toward downloading and streaming games over the internet instead of using physical discs. One of the most popular such games is “Fortnite,” which recently screened a trailer for the Christopher Nolan movie “Tenet” within the game’s virtual world.

Gamers are notorious for howling at changes they don’t like–and they have not exactly clamored for ads inside games that often cost around $60. But many online games are free, with publishers making money by selling virtual goods or rewards.

“Hardcore gamers, if they are used to paying $60-plus for a videogame, they may not feel aligned with an ad-supported experience,” said John Frelinghuysen, managing director of consulting firm L.E.K. Consulting, which has researched the subject of ads in games.

“But as you move down to midcore or casual-level gamers, playing free games or games on subscription services, we think the market is much more ready for that.”

Executives involved in the tests acknowledged the risk of alienating gamers, but added that they have shown a willingness to accept ads in exchange for rewards. It is important that marketers run ads that speak to the audience they are trying to reach.

“If we are serving this type of content to this type of audience, we are not going to push dog food,” said Marie Hughes, senior vice president of strategic media planning at Turner. “It’s actually content that they hopefully care about.”

He said Mr. Madden’s experience in the gaming industry and working with brands will ideally help Simulmedia expand its tests–and make them more amenable to gamers.

“The most fundamental piece is we have to create an ad experience that gamers accept,” Mr. Morgan said. “Maybe they won’t love it, but at least they can say, ‘Yeah, for a couple of points or a battle shield, I’ll watch the ad’.”