Equity allocations have rebounded to their highest levels in two years at 47% of total financial assets, just below the tech bubble peak, which sat at 51%, said Goldman Sach’s equity analyst Arjun Menon in a recent client note.

Menon and his colleagues in the portfolio strategy research team released a new report exploring existing equity demand and forecasting supply and demand for equity in 2021. The team made five concrete predictions.

The outcome of the US elections is a prominent theme across the predictions with the potential of a so-called blue wave acting as a risk factor for some predictions.

“We expect overall equity allocation will climb in 2021,” Menon said. “The increase will likely be driven, in part, by a continued rotation away from cash. Although money market funds have experienced outflows during the past month, allocation to cash remains higher than its early 2020 levels and would have to decrease by another $3 trillion to reach its recent lows, all else equal.”

Prediction 1: Foreign investors will be the biggest buyers of US equities in 2021

Foreign investors have been the largest buyers of US stocks this year. This is a trend that Menon sees continuing into next year.

Foreign investors will purchase $350 billion of US equities in 2021 alongside a weakening US dollar, Menon said.

“A weaker-than-expected US dollar and reduced tensions with China could drive higher foreign investor demand for US equities than our baseline forecast,” Menon said. 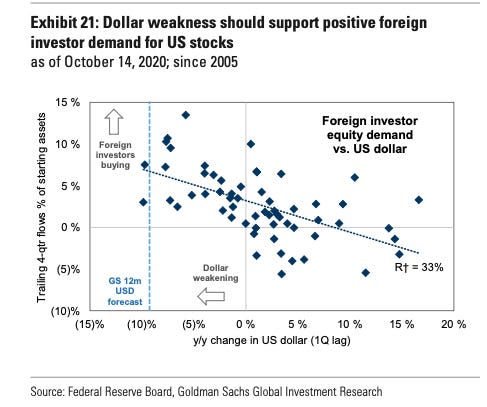 However, under a “blue wave”, higher corporate tax rates in the US and increased regulatory uncertainty could create potential headwinds in investor demand, Menon said.

US households are more than just retail investors; they include nonprofits, domestic hedge funds, private equity funds and personal trusts.

Goldman Sachs predicts that US households will buy $100 billion of US stocks in 2021. However, it also expects that the top 1% will continue to be the biggest driver of total demand.

“The top 1% has by far been the main source of equity demand from households during the past 30 years.”

The top 1% of the population have the majority of household equity ownership, owning $23 trillion — a near all-time high. For comparison, the bottom 90% own $5 trillion. 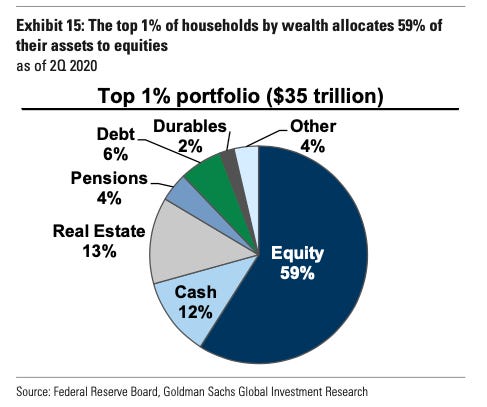 Although, a “blue wave” could be a risk to this prediction. If there was to be a Democratic sweep, the democrats are likely to increase the capital gains tax rate, which could push wealthy households to sell equities, Menon said. However, he also noted, in 2013 when the rate was increased, in the following months the top 1% bought back more than what they had sold prior to the hike.

Goldman Sachs economists are also predicting faster economic growth under a Democratic sweep, which they believe will boost household purchases of US equities next year.

Prediction 3: Assets under management will continue to shift from active investing to passive investing 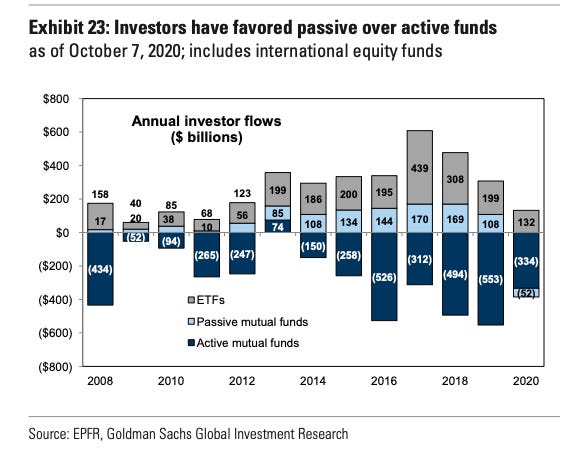 In 2021 there will be net selling of $200 billion by mutual funds and $250 billion of purchases through exchange-traded funds, Menon forecasts.

“We expect the secular shift in AUM from active to passive management should persist and drive continued mutual fund selling and ETF inflows next year,” Menon said. “Rising equity prices and record low US equity mutual fund cash holdings (1.9% of AUM) should also weigh on equity demand from active managers.”

Despite passive funds experiencing large outflows in the months following the equity market trough, the funds are now seeing a trend of inflows of around $36 billion, Menon said.

Prediction 4: Pension funds will be net sellers of US equities in 2021

“2020 marks the first year that pension funds have been net buyers of stocks since 2008,” Menon said. “Pension funds bought $146 billion of stocks in 1Q as equity prices plummeted. In fact, excluding the 1998 correction, pension funds have purchased equities during each of the 13 US equity bear markets since 1950.”

A “blue wave” would increase the chances of pension funds selling equities next year; Goldman Sachs’ interest rates strategists expect the 10-year US treasury yield to rise more under Democrats than under a divided government.

In 2020, net corporate purchases dropped 70%, according to the report. The opposite is expected to happen in 2021.

Goldman Sachs is expecting net corporate purchases of US stocks to surge by 100% to $300 billion in 2021.

“A double-digit increase in gross buybacks and a normalization in equity issuance from its record high levels this year suggest that net corporate demand for shares will rise in 2021,” Menon said

Rebounds in corporate earnings combined with reduced uncertainty and low interest rates should support a rise in gross buybacks in 2021. But Menon forecasts lower buyback executions because of restrictions on the financial services industry and the negative rhetoric around share repurchases.

One reason Menon and his colleagues believe there will be increased corporate demand for shares next year is that gross equity issuance has reached an all-time high this year, which includes SPACS, and it is likely to normalize next year to the consistent levels seen across the years before the pandemic. Generally, equity issuance was between $200 billion to $250 billion, previously.