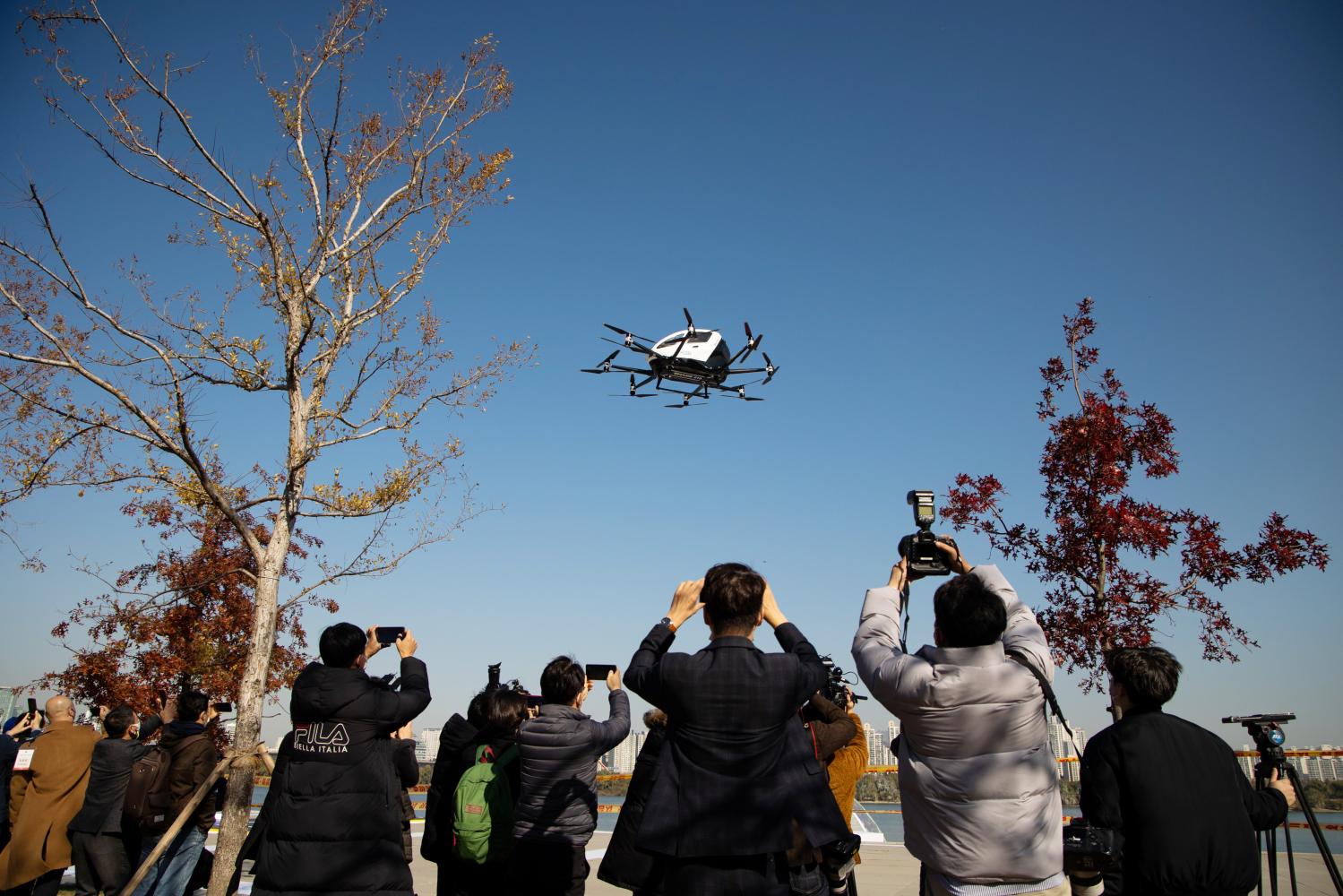 Members of media take photographs and film the EHang 216 during a demonstration in Seoul on Wednesday. (Bloomberg photo)

A drone taxi and a drone delivery were tested in South Korea’s capital yesterday as the country moves closer to launching unmanned air vehicles by 2025.

The event, near Seoul’s Han River, offered a glimpse into the future and what flying vehicles might look like in a densely populated city.

South Korea is investing around 24.5 billion won ($22 million) through 2022 to develop the so-called K-Drone System.

The demonstration in a quiet riverside park started with the flight of several small drones, which are designed to monitor traffic conditions and alert for any potential danger. A siren rang to signal the all clear before a larger, two-seater drone, made by Chinese company EHang, began its take-off.

No human passengers were on board the 5.6-metre-wide drone due to safety regulations. Instead, it carried 70 kilograms of rice bags in its seats.

The vehicle glided above the river for around 10 minutes at a height of about 36 metres and reaching speeds of up to 50 kilometres an hour.

When the EHang 216 passenger-grade auto aerial vehicle’s electric battery is fully charged, it can fly for as long as 30 minutes, according to Bill Choi, EHang’s Asia business head.

“The company’s drones are already in use in China, for deliveries, firefighting and some tourism purposes,” he said.

Flying taxis and other autonomous vehicles in the skies may sound like science fiction at the moment, but one day they’re predicted to be big business.

McKinsey & Co estimates the potential market size for drones could touch $46 billion in the US alone by 2026. In Japan, it could reach around $20 billion by 2025, according to a forecast by drone startup Skyrobot Inc.

South Korea estimates its own local market for aerial vehicles will be about 13 trillion won by 2040.

Yesterday’s event was part of a series of ongoing tests of unmanned drone taxis and drone deliveries aimed at easing urban traffic congestion in South Korea.

“Initially, flying cars will be controlled by a human on-board pilot and will look more like small helicopters,” said Seo Jeong Seok, deputy director at the newly-created department overseeing drones in the Transport Ministry.