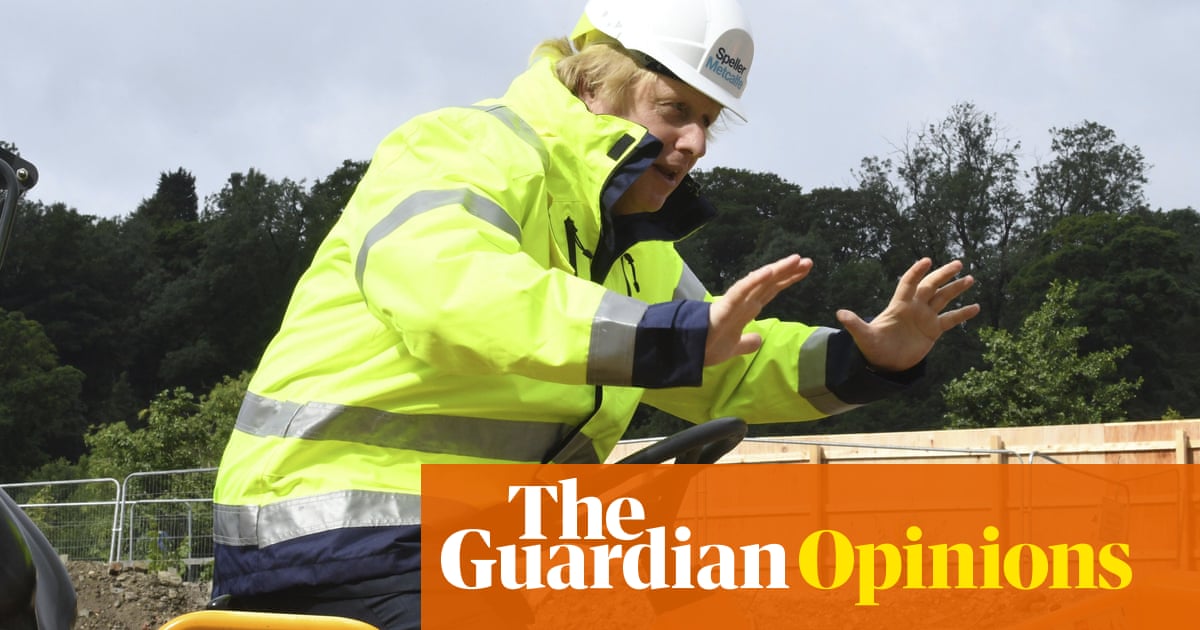 The past few months have been a bit of a downer for Boris Johnson. Just one bad news story after another. So it was time for a rewrite. The equivalent of Dallas series nine that turned out to have been all a dream. Boris would go back to his happy place of last year’s general election campaign, when all he had to do was turn up and say the same old bollocks of “getting Brexit done” and levelling up the country and people would be fawning on his every word.

So at the Dudley Institute of Technology in the West Midlands, Johnson rehashed one of his old campaign speeches for the relaunch of “Love Boris”. Only without the bits about Brexit, which was well and truly done now, given this was the last day he could have asked the EU for an extension to the transition. Here was Boris at his most upbeat. His most vague. His most incoherent. God help baby Wilfred if Boris ever gets round to reading him a bedtime story.

There was the briefest of nods to the coronavirus pandemic, but even here Boris didn’t want to kowtow to all the doomsters and gloomsters who had picked holes in the government’s response over the past few months. Yes, a few people had died and it was awkward that there was a spike in the infection rate in Leicester at the time he was planning to ease lockdown restrictions elsewhere in England, but couldn’t we all forget about the bad stuff just for today? Why not concentrate instead on all the hundreds of thousands of people the government hadn’t managed to kill and the millions who had been saved – for the time being, at least – from unemployment through the furlough scheme?

Then we got down to the nitty gritty. Boris didn’t want to draw comparisons with Franklin D Roosevelt’s New Deal, though if others did he wasn’t going to complain. Only FDR had spent 40% of US GDP on a whole load of job creation schemes, while Boris was stumping up the princely sum of 0.2% of UK GDP. Or £5bn of old money that had already been promised in the March budget.

As so often with Boris, his whole speech was based on a lie. He was acting as if he was announcing something new when the money had been already accounted for. You can get away with recycling old columns for the Daily Telegraph, but you quickly get found out as prime minister.

It also turned out that the £5bn was going to have to go an awfully long way as Boris listed the various infrastructure improvements he had in mind for schools, hospitals, roads and housing. Though it did also sound as if he thought hospitals were funded out of philanthropy as he went out of his way to praise the £35m Captain Tom had raised for the NHS as charity work.

All this, though, depended on Operation Speed. Something the prime minister may have taken too literally as the entire speech sounded as if it was being delivered by someone out of his head on amphetamines. Just one long gabble of barely connected sentences with only a passing glance to reality.

Planning rules would be ripped up. Honest Bob Jenrick had merely been a month or two ahead of the game. There would be no more room for “newt-counting” as the French and Germans were well ahead of us in housebuilding. Just as well we were leaving the EU then. Boris didn’t even appear to realise that he was now promising to build in eight years what he had originally promised to build in five. Speed can do that to you.

Having raced through a long list of government infrastructure projects – Boris is going to get a hell of a shock when he realises who has been in government for the past 10 years to let things gets so bad – Johnson was momentarily concerned that some traditional Tories might think he was a communist for even daring to suggest doing more for those who had been hardest hit by austerity. Not that there had ever been such a thing as austerity. That was just a word dreamed up by the Labour party along with David Cameron and George Osborne.

So just to make sure that everyone knew he also cared deeply about the filthy rich, he proposed a weekly “clap for capitalists” night. Just as on Thursdays the public had gone out on to the streets to applaud the NHS and emergency services, Friday should be the day we go outside to thank Richard “Dirty” Desmond and the other multimillionaires who had done so much to make Britain Great again. Though we must be sure to clap very loudly or some of them might not hear from their tax havens abroad.

Predictably, Boris struggled when it came to the questions. He merely shrugged when it was pointed out to him that £75 a head probably wouldn’t go that far and that right now more people were worried about the more immediate concern of whether they would still have a job in a couple of months than building projects that might take years to complete. “Um…,” he said, sure that jobs in the hospitality and services sectors would soon be back on stream.

“Wait for what Rishi has to say next week,” he added, before getting himself into a tangle by committing himself to a public sector pay freeze or a tax rise. Let the chancellor sort that problem out. Boris looked to his handlers before heading for the exit. It had been a shambles, but it had served a purpose. For a few hours he had got people talking about things that may or may not happen instead of the coronavirus. And he’d conveniently diverted attention from Michael Gove’s hopeless efforts to explain to the Commons why the best way to ensure a diverse and decentralised government was to ram No 10 with trusted “Yes Men”.